Yes, it’s true! As from Friday 19th February we have our own YOU Tube TV!

Available to watch now are ALL last season’s 1st XV fixtures with the hope that in the coming weeks/months we can add other features including matches from 2018/19, 2020 Lockdown features such as My5 and Player Profiles.

If it’s possible we also hope to feature live feeds for whenever we are given the green light to return to live rugby.

Included are our sponsors and advertisers adverts which gives them a little more return especially after their very generous support for this season (despite there being no actual macth programmes or spectators at Hartree Mill).

Well done GY and especially Nigel who undertook to upload all the footage gleaned from the SRU files.

To watch, you can either go to You Tube and Search for Biggar RFC TV or if you’d prefer, simply follow this link

Please remember to then hit the SUBSCRIBE BUTTON as the proof of the channel’s worth will be in the number of folks who actually subscribe. 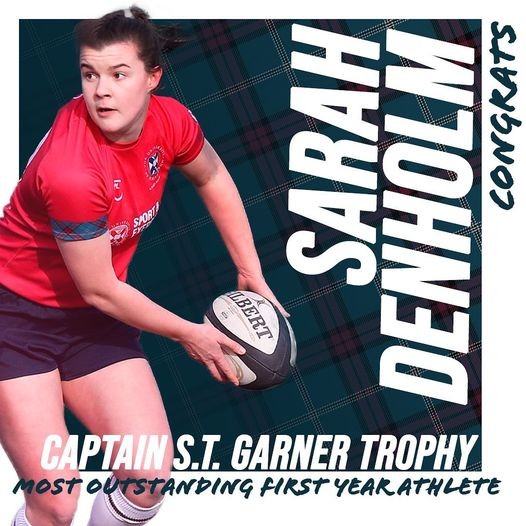 There is no activity at Hartree Mill at the moment and so good news is in short supply but there was one really good piece of news this week which features one of our own, namely Sarah Denholm.

There was much joy in the Denholm household this week – and of course within the club – when it was announced that Sarah was the recipient of the prestigious Captain S.T Garner Award for most outstanding First Year Athlete from Edinburgh University. Short listed with 3 other girls, Sarah came out top!
Many congratulations on this wonderful achievement which is a tribute to Sarah’s hard work and commitment. Sarah is a great ambassador for Biggar RFC and her award received many very positive comments about her as a role model for the younger girls at the club and indeed anyone who is looking to play rugby.

The first link below will take you to the actual announcement of the award while the second is a link to a full length interview with Sarah where she talks about how she got involved in rugby and how her career has progressed alongside her Uni commitments. Well worth a listen!

John Bell
It is with great sadness that the club records the death of John Bell on the 28th December, aged 71.

John was passionate about Biggar RFC and will be well remembered by all who were club members in the early years and many of those to follow. John came to Lamington and Biggar with wife Linda in the 1970’s. He was director at the family firm of John Bell Bakers, a role he revelled in but which took up many hours.

Previously a keen member of East Kilbride (a club formed in 1968, a mere 7 years prior to Biggar), John was elected as captain of their 2nd XV in 1975/76 whilst also playing some games for the 1st XV. Having made the move to Biggar he very quickly became a valued member of our club. He was a great club man who enjoyed all aspects of the club, it’s management, the social side and of course the game of rugby itself. As a character he could recount a great story, as well as being the subject of many, while his love, and recitals, of rugby songs was well known!

John joined Biggar’s committee in 1979/80 and took over the Treasurer’s role in season 1982/83 from Bobby Clyde. He served as Treasurer until 1989/90, the 1980’s being a particularly successful decade for the club when promotion was achieved on 5 seperate occasions.

Elected as Vice President in season 1987/88 he combined this new role with that of treasurer through to 1990/91 to allow continuity of financial matters as the club completed the construction of the Hartree Mill clubhouse. This was an incredibly busy time for the Treasurer (never mind for someone so involved, as John was, with work committments) but his contributions also allowed President Bobby Boyd to oversee the club opening celebrations. His financial knowledge and management of funds proved invaluable at this time.

John’s presidency lasted until 1992/93 during which time the club was awarded its first McEwans Club of the Month award.

John retained a very close association with the club following his years in office, providing sage advice when required and continuing as a club sponsor – a Bell Bakers logo still appears on the senior players shorts.

In recent years John suffered from MSA, a degenerative neurological condition; his quality of life had significantly depleted and his death, albeit very sad, allows an end to his suffering. John will be sorely missed as a club member but primarily as a very good friend to the many in the club and the wider Biggar area who knew him well.

Our loss is small however, when compared to that of wife Linda, daughter Samantha, son-in-law Stuart and grandchildren Ethan and Amelia.

The club extends its deepest sympathy to the Bell family and our thoughts are with them at this sad time.

The following are a but a snap shot of John’s club involvement.
As a Twickenham bound tourist in 1991 with Saltire and coffee(?) in hand.

As player in the Santa match circa 1993

In coach mode at Hartree Mill.

Attending the annual Club dinner, this the last dinner to be held in the Elphinstone Hotel 1990.

Attending the Annual dinner, this the first to be held in the new Clubhouse 1991

Please find below links to Christmas messages from President James Orr, skipper Euan Sanderson and several of our Academy members.

A very merry Christmas to all and all the very best of luck for 2021.

After almost 8 months of campaigning you will no doubt be aware that we now have the result of the SGM vote from last night. And, so very sad to say, it’s not the outcome we had hoped for with votes cast 90 to 78 in favour of the orginal SRU ‘null and void’ decision. In addition to those votes there were 26 abstentions from those club delegates present.

This means, very simply, that despite having ‘won’ the National League 1 title (the photo above is too good not to be included) and the promotion to the Premiership that was part and parcel of winning that title, Biggar will play in National League 1 in season 2021/22 (season 2020/21 having been abandoned due to the pandemic).

That the pandemic has had such a huge impact on life is not the doing of the SRU and as an organisation they have clearly suffered as much as – if not more than – any other business. Having said that the obfuscation Mike Booth our secretary has faced at almost every turn when asking what should have been very simple questions has done nothing to engender our confidence in their ability to run the organisation, display fairness or even apply basic common sense.

That so many clubs voted against or abstained is their business. It may in part be down to the length of time it has taken to get the motion raised but the fact that many see the matter of our promotion as of far less import when compared to the effects of Covid which will see clubs folding is a given.

That we chose to fight the decision was, we still firmly believe, the only course of action. The senior players, their coaches, our members (of all ages), our supporters and our sponsors have all contributed to get us where we were – a Championship winning side who achieved a back-to-back promotion with Premiership rugby the reward.

To have won that prize, to have been presented with the trophy only to have it taken away a few weeks later is unjust.

Having said all that, we must now regroup as best we can and prepare for another National 1 title challenge. No one can predict what things will look like in August 2021 – it is the best part of a year away – and there is no guarantee that the league format will look the same or that squads – ours and others – will be the same. But we can and must ensure our squad is as well prepared as it can be and ready for that challenge.

Finally, for his huge contributions to the cause, a huge thank you must go to secretary Mike Booth who has shown positivity, tenacity, determination and sheer doggedness as he has fought our case, many of the same qualitites shown by our senior players who won the title! We have had many excellent secretaries in the past but few have had to face this sort of challenge. Mike has come up trumps throughout and deserves all credit for his efforts. Well done Mike!

There has always been much more to BRFC than the 1st XV and senior squads however, and it is pleasing to note that all the Youth sections have continued to plug away on the training pitch although the recent ‘Tier 4 lockdown’ which prevents any form of contact and requires players to socially distance has taxed the minds and ingenuity of our coaches.

How good it was to see last week’s orienteering course which got whole families out and about while this week the challenge is Rugby Golf with a course laid out around the Hartree Mill pitches. The only person a tad concerned is groundsman Hugh Barr, but panic not Hugh, I’m reliably informed that the golf course holes are really small……!

And following that same training thread it was also great to see our Borders contingent of players and coaches enjoy live sessions in Broughton over the past two weekends. Prevented from travelling from their Tier 2 area to Lanarkshire’s Tier 4 area, a full-on session was organised for all and that of course included contact activities – what a difference a few miles can make!

And as a reminder of our ‘One Club, One Family’ mantra this wee video of our S1’s sending their best wishes to team-mate Rohan McLeod who is leaving these shores for a new life in the US is well worth the watching!